The two-year-old took his first steps around his new home today (Thursday) at the award-winning park where he joins a trio of polar pals. 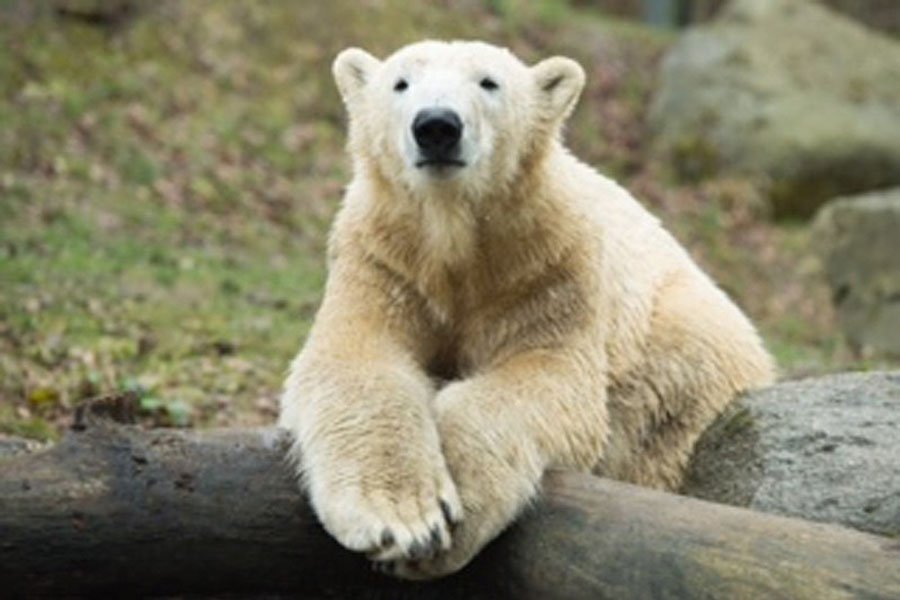 He will share his new home with Victor, Pixel and Nissan at the 10-acre Project Polar complex,  complete with pools, caves and rolling terrain that replicates the bears’  Arctic summer tundra habitat.

“We are delighted to welcome Nobby to Project Polar,” said Simon Marsh , Animal Collection Manager of the park at Branton, near Doncaster. “He will take a while to settle in and get used to his new surroundings and polar neighbours and then visitors will soon be able to see him out and about.

“The Polar Reserve is spacious and designed to stimulate the bears and ensure they have enough room to roam,forage, play and swim. I’m sure Nobby will quickly become a favourite just like Victor, Pixel and Nissan.”

The all-male grouping has been brought together in co-ordination with the European Endangered Species Programme for polar bears. YWP is at the forefront of animal conservation and is part of a global project to save polar bears which are threatened by disappearing habitat and hunting. Project Polar is the one of the largest reserves in the world and a dynamic initiative for conservation, welfare and research.

The two-day operation to transport Nobby from Munich Zoo, where he was born, to Doncaster has been six months in planning and the 1,000-mile trip went without incident.

Keepers at Munich worked with Nobby and his twin Nella were gradually introducing and acclimatizing them to their separate travelling crates in preparation for the journey.. Nella will take up residence with a female group in a Dutch zoo while Nobby is making a new home in Yorkshire.

The timing of the move reflects the call of the wild where young polar bears split from their mother after two years and strike out on their own.

“It is exactly what happens in the wild and Nobby is ready for the move,” added Mr Marsh. “We put a lot of planning into any journey we do with our animals and this was no different. We want to ensure they are comfortable and relaxed as possible and I can confirm that Nobby arrived in good spirits and was excited to explore his new home.”
YWP has become a leading force in polar bear conservation since launching Project Polar in 2014 and  bringing the world’s largest land carnivore to Yorkshire. The four male bears are the only Polar bears in the country.

The  purpose built polar bear centre is one of the biggest in the world spanning 10 acres (about 8.5 football pitches!)  and divided into four sections, featuring landscaped hills, valleys, lakes with water up to 8m deep, pools and waterfalls.

It was designed in consultation with world experts to be a centre for Polar Bear conservation and research as well as for bears with welfare needs, offering a stimulating complex environment.

Meanwhile, the Yorkshire Wildlife Park Foundation has been raising funds for polar bear conservation projects working with Polar Bears International and has recently started working with the IUCN Specialist Group on Climate Change.

YWP, which puts conservation and animal welfare at the heart of all it does, has just announced a £3.6m expansion and  improvement  plan for 2016 involving bringing endangered black rhinos to the park.

The current African Plains will be completely redeveloped and expanded in a £1.6m project to create a new walk through Safari experience.

The park, one of the UK’s fastest growing and most innovative attractions, brings visitors almost face to face with some of the world’s most rare and beautiful animals. It has a unique collection of animals including Amur Leopards and Tigers, Lions  Anteaters, Giraffes, and many more.

It is the perfect place to come this Half Term for a fun packed family day –  with a weather proof Monkey Play Barn offering adults the chance to relax in the warm 120 seater café  while children enjoy three levels of play equipment – in full view of the baboon reserve through a glass wall.
For more information and to check how Nobby is doing visit :  www.yorkshirewildlifepark.com