Skip to content
Penguin Chick Named after Sir David Attenborough at The Deep!

Penguin Chick Named after Sir David Attenborough at The Deep! 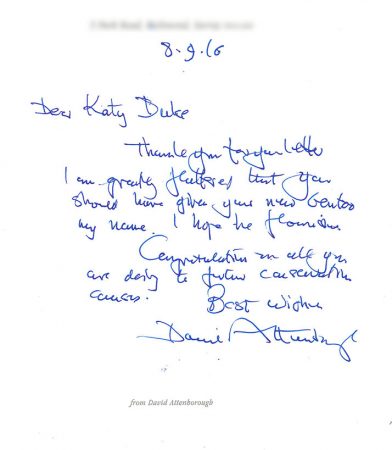 Aquarists at The Deep have finally been able to discover the sex of the two penguin chicks which hatched back in June this year from DNA in a tail feather.

The Deep wrote to inform Sir David Attenborough of his namesake and received a hand written reply stating he is “greatly flattered that you should have given your new Gentoo my name” and congratulating The Deep on “all you are doing to further conservation causes”.

Katy Duke, curator at The Deep said “We are very honoured and touched to have received a handwritten reply from Sir David Attenborough. He is an inspiration and an amazing role model who inspires us all by his conservation work and by engaging everyone with the natural world”.

Lizzie and Attenborough are now fully grown and living happily with our adult birds. We work with the European breeding programme for Gentoo penguins and so in time our individual birds may move to other facilities in order to form new breeding groups.