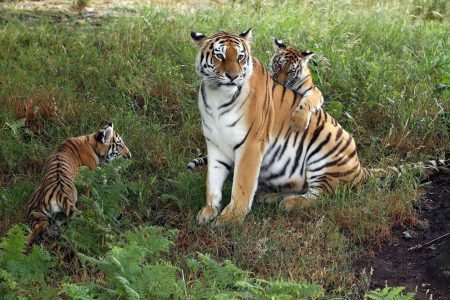 It was a big day for the four-month-old cubs as their names, which have been chosen by the public, were also revealed.

Meanwhile, visitors to the award-winning park were finally able to see the three playful cubs enjoying the main reserve for the first time at the Land of Tigers –  a thrilling sight which was all captured on film.

“They needed no encouragement as they were brave and eager  to explore an exciting new world for them.

“They were a delight to watch as they loved exploring  the reserve, a new  environment designed to stimulate their natural instincts.”

Only 450 Amur Tigers survive in the wild in their native Russia.

The innovative park, near Doncaster, is a major conservation force and its Amur Tiger programme is part of a global mission to save the endangered tigers.

The birth of the cubs was a worldwide sensation.

It was filmed in March and drew a Youtube audience of more than five million and more than 20,000 viewers have watched their first steps in public.

“They are beautiful animals and we want as many people as possible to enjoy seeing them and learn about the species,” added Ms Wilkins

The Amur trio, two boys and a girl born to parents Vlad and Tschuna, have all had names beginning with H chosen by the public. Every vote earned £1 towards tiger conservation.

The winning names were Hector and Harley for the boys and Hope for the girl.

During International Tiger Day on Wednesday visitors were able to learn about the species and its quest for survival with talks and fun competitions.

YWP experts were on hand to answer all questions about the cubs and tigers and there were  tiger artifacts, face painting and a competition to guess how many stripes Vlad has. The Yorkshire Widlife Park Foundation (Charity Number 1152642) is  raising money for the conservation of Amur Tigers in the wild, where they are threatened by poaching and disappearing habitat

The Foundation’s Cheryl  Williams said: “The cubs are a symbol of the fight to save the species. We are at the forefront of the campaign to help the Amur Tigers. Every penny raised will go towards helping the Amur Tiger population.”

To keep up to date with all the latest news, visit our events page. And for more information on the rare Amur Tigers, visit www.yorkshirewildlifepark.com