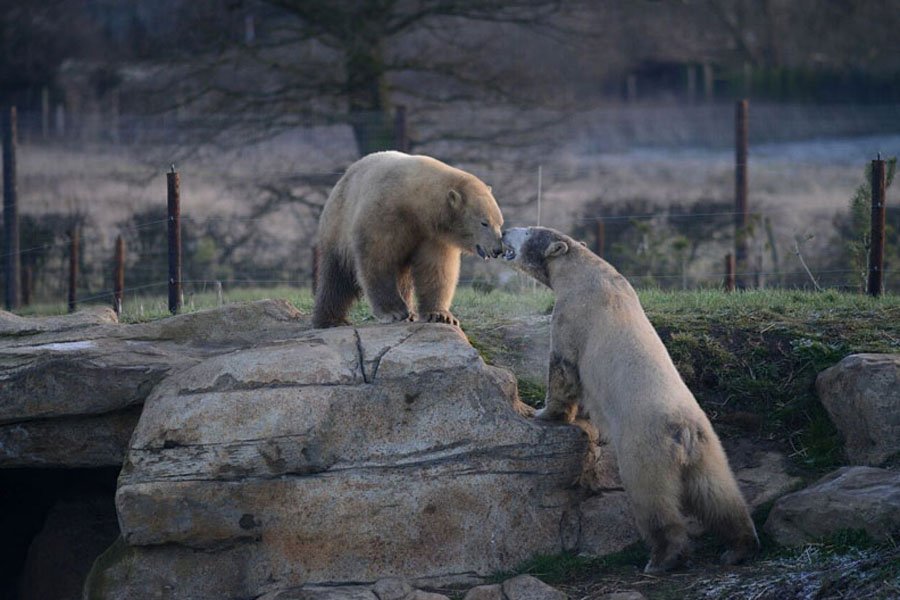 The park, home to four majestic polar bears, has joined the call to the public to save energy to reduce the global warming that is devastating the Arctic ice cap.

Arctic Sea Ice Day, which takes place on Friday July 15 with events around the world, is focusing on the drastic reduction of the minimum ice levels which are declining by 13.4% per decade. The diminishing ice, which supports a vast eco system of animals and plants, poses a huge threat to polar bears whose hunting grounds are vanishing.

“The Arctic is far away and vast so people don’t necessarily realise that the sea ice is rapidly receding and animals, such as polar bears, are struggling to survive,” said Cheryl Williams, Trustee of the Yorkshire Wildlife Park Foundation.

“Every year the ice declines makes it even tough for these wonderful animals to survive. The good thing is that we can all do something that can turn this around. Just little energy-saving steps and the way we shop could combine to make all the difference to their future.”

YWP is part of the international programme to protect the species and its 10-acre Project Polar Reserve – home to the country’s only polar bears Victor, Pixel, Nissan and Nobby – is a unique centre for conservation and welfare and one of the largest polar bear reserves outside Canada.  The reserves of Project Polar have rolling hills, lakes and caves mirroring the Arctic summer tundra.

Visitors are mesmerised by the four bears playing together and diving – the largest lake is 8m deep and an acre in size.

The Yorkshire Wildlife Park Foundation charity has been at the forefront if conservation for the species and works closely with Polar Bears International on education and awareness and also research of the bears in the wild especially relating to climate change including a research project on the bears denning behaviour and cub emergence in Svalbard, Norway.

Climate change has caused havoc with polar bears and one study showed that Canada’s Western Hudson Bay population has experienced a 22% decline since the early 1980’s, directly related to longer ice-free seasons.

Polar Bears are one of many species that depend on the Arctic Sea ice, using it to hunt and build winter dens for birthing. Every year, they are forced ashore earlier in the summer because of warmer conditions while the winter ice is taking longer to form and depriving them of food.

The condition and survival of many adult polar bears and their reproductive success is tightly related to their fat stores. Females who are in poor condition have smaller litters and smaller cubs that are less likely to survive.

Making sure lights are switched off and unplugged and keeping the thermostat at 18C or below would also reduce C02 emission.

“We stand at a point of no return; we can continue on this detrimental path or make a choice to change the way we live our lives,” added Ms Williams.

“Future generations of not only polar bears, but species across the globe, including humans, depend on the decisions and plans we make today. The harsh truth is that polar bears and many other species in the Arctic are unlikely to survive if there is a complete loss of summer sea ice cover, which has been projected to occur before the turn of the century by climate models. “

YWP, which puts conservation at the heart of all its activities, is the UK’s fastest growing and most innovative walk through experience.

Visitors come almost face to face with some of the world’s most beautiful and rare animals, including Amur Leopards, Tigers, Painted Dogs, Giraffes, Lemurs and many more.

YWP is at the forefront of many international breeding and conservation initiatives and the Yorkshire Wildlife Park Foundation raises money for conservation and welfare projects overseas.

For more details about Arctic Sea Ice Day and how you can help, visit www.polarbearsinternational.org