The Deep is delighted to host a series of marine themed art installations in celebration of Hull’s year in the spotlight as the City of Culture 2017. 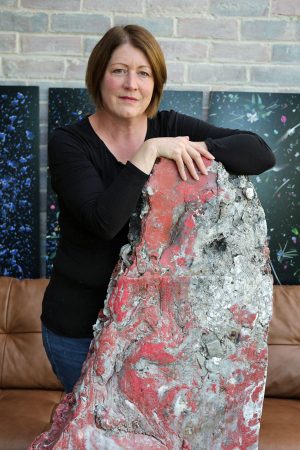 The Deep will play host to six artists throughout the year, all of which have produced thought provoking artwork with a marine art theme. Their works will illustrate the diversity of marine wildlife in our oceans, their stunning habitats and the threats they face.

The first of these artists is Mandy Barker, an award- winning photographic artist whose work involving marine plastic debris has received global recognition. The motivation for her work is to raise awareness about plastic pollution in the world’s oceans whilst highlighting the harmful effect on marine life and ultimately ourselves.

Born in Hull, her recently recognised work was originally inspired from visits to Spurn Point. Barker has since been commended with a number of awards and her series ‘SOUP’ has been published in over 25 countries.

Visitors will be able to enjoy Mandy’s work when visiting The Deep in January and February 2017. More examples of Mandy’s work can be seen at mandy-barker.com.

Artist Mandy Barker said: “I am really proud to have the opportunity to exhibit at such a relevant venue as The Deep – one of the most spectacular aquariums in the world, in my home town of Hull, for the opening exhibition for the UK City of Culture 2017, returning to the place where my work began.”

Nick is a British artist who specialises in contemporary marine and wildlife art. Most well-known for his work on black backgrounds, Nick has expanded his focus to incorporate metals and high gloss resin, adding new textures finishes not seen before in the art world.

Finalist in the International Wildlife Artist of the Year Competition every year since 2010, he won the “Into the Blue” category in 2016.

Each year the British and Irish Association of Zoos and Aquariums (BIAZA) holds an annual photography competition – The National Zoo Photography Awards – conveying life within a BIAZA collection, work behind the scenes and connections to their conservation work. Often being skilled artists and photographers, this collection of images celebrates the wide array of species in our care, their quirky characteristics and the dedicated keepers responsible for looking after them around the clock.

Nick has a real passion for photography, both above water and below. After leaving a corporate career in 2008 he began traveling around the world for 2 years but now resides in Thailand working as an underwater photographer. Having grown up in Hull, Nick has a real passion for sharing is knowledge and experience amongst his students and jointly with his photographic skills, has provided an experience of a lifetime with memories to last.

Haeckel was a German Biologist, Naturalist and Artist who discovered and named thousands of new species. In 1899 he began to publish a series of extraordinary images that changed the way we viewed the relationship between Art and Science, these created the 10 volumes of Art Forms of Nature. Having been reproduced with the kind permission of the ZSL (Zoological Society of London) Library, this stunning combination remains, to this day, an astounding record of life on earth.

Alexander is an artist and designer whose unique creativity reflects his life-long relationship with the sea. He has established the internationally acclaimed Fish & Olive gallery in the ancient village of Halki, Greece. His exquisite fish designs feature on ceramic and porcelain and are also incorporated into silver jewellery, Naxian marble, brass, wood, and lithographs. His engagement with marine conservation is expressed through his close association with the Cousteau Divers and his beautiful images are a celebration of diversity and reflect a powerful plea for ocean recovery and restoration.