In almost every pit village in England you are welcomed with a giant pit wheel which has become symbolic of its mining heritage. On Tuesday 30 June The National Coal Mining Museum will reinstall a newly restored winding wheel in preparation for welcoming visitors back to the site when the museum re-opens.

The National Coal Mining Museum’s Grade II* Listed 100-year-old headstock is believed to be one of the last remaining, if not the only, timber headstocks in Europe. Thanks to funding from the Department of Culture Media and Sport the museum has been able to spend the last six months repairing the headstock including the newly restored winding wheel. 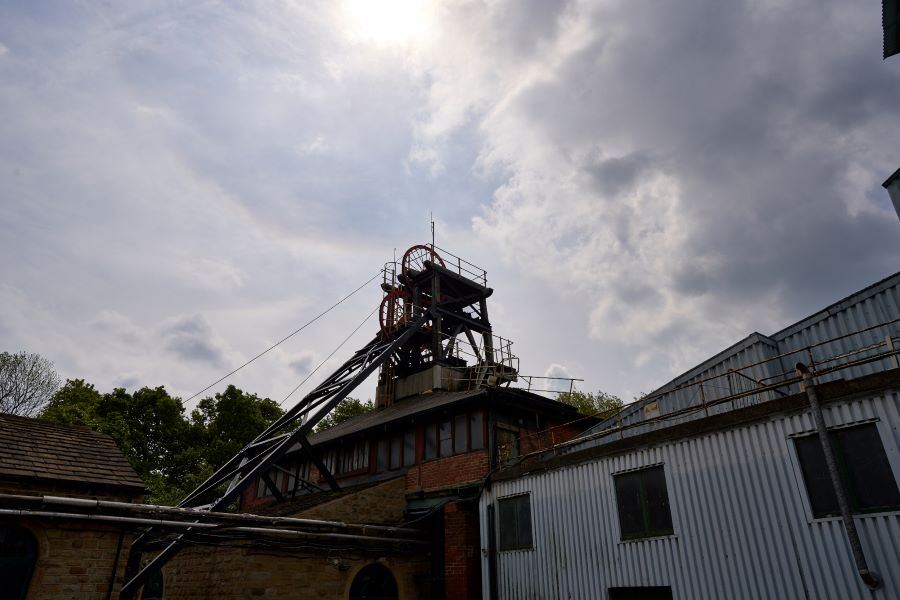 Shaun McLoughlin, Mine Director remarked “As a part of a routine inspection I noticed the paint flaking and a bit of wood rot in the headstock so I brought in a Timber specialist, who then identified that the wood rot was severe. We were fortunate to not be dependent on the structure and had contingencies in place to ensure the cage continued to run safely and seamlessly for public. However as it is a structure of such historic importance, we brought in conservation specialists to ensure that it maintains its historic integrity and to restore it to its former glory.”

“The timber headgear at The National Coal Mining Museum dates from between 1905 and 1911 and used to be a vital component in running the mine shaft leading 140 meters from the surface to the coal seam. The headstock structure, which resembles a tower, houses the winding wheels which contains a rope which is attached to a cage which used to transport men and materials into the mine.

While many people believe that the winding wheel on the top of our shaft operates the cage it has been purely ornamental for quite a few years. By restoring the headstock we have not only prevented the further degradation of a historically important structure but we have opened up new ways to tell the story of mining. In the future we could run the steam winding engine to turn the winding wheels for public demonstrations where the public could see how the winding wheel worked in all its glory.” said Jenny Layfield, Museum Director

Shaun McLoughlin, Mine Director noted “Installing the winding wheel is a huge logistical operation as it has a 2.95m diameter and needs to be lifted exactly on to two supporting beams at height of 9m. The area around the mine shaft will fortunately be clear due to the closure but the crane operator will have a challenge negotiating the move in a notoriously windy spot.”

The new winding wheel can be seen from the main road but the best views are from within the National Coal Mining Museum where the public will be able to pre-book a visit to get a closer look at the structure as soon as the museum opens. The museum will announce its reopening date